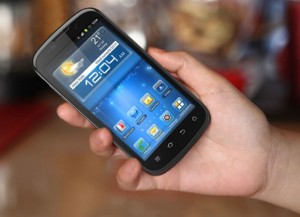 Looking for an Android Ice Cream Sandwich-powered mobile but not looking to hemorrhage your bank account? Well, ZTE has unveiled its Mimosa X ahead of the Mobile World Congress.

ZTE generally plies its trade over in the east but seems serious about coming to Europe and shaking off its reputation for low-end budget mobiles.

As you may have noticed, ZTE has skinned ICS with its own user interface but it would have to be pretty special to come close to HTC’s Sense UI.

You have probably already noticed that the Mimosa X is sporting four capacitive buttons along the bottom of its face, just like older Android phones did. A bit of an odd feature as Ice Cream Sandwich doesn’t even need them. Still, each to their own I guess.

The Mimosa X is equipped with a 4.3-inch screen which dishes out a resolution of 960x540p.

The most interesting thing is that the Mimosa X is the first handset to be powered entirely by Nvidia chips.

It has the dual-core Tegra 2 processor, as well as an Icera HSPA+ modem.

All things considered, this ZTE blower should be relatively inexpensive to produce, which should mean that it should be fairly competitive price-wise.

Nvidia has described the Mimosa X as the “first mainstream Tegra Zone phone”, which hints that it should be wallet and purse-friendly when it launches around April time.

You also get a 5-megapixel camera, 4GB of storage which is expandable to 32GB. There’s even a gyroscope is built in too.

ZTE is playing coy with the other specifications and the price range but all will be revealed at MWC 2012 no doubt.

Would you buy a ZTE phone? I feel that 2012 will see a full-scale ZTE invasion of Europe.