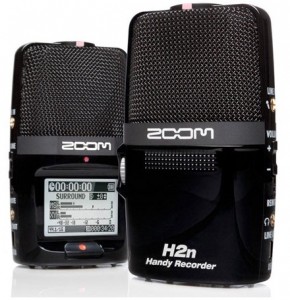 The Zoom H2 SD has almost become the standard if you wanted a portable professional digital recorder – and that has been out since 2007. Zoom has decided that it was high time to bring out something for 2011 – say hello to the Zoom H2n handheld recorder.

The Zoom H2n is equipped with not one but 5 “studio-quality” microphones and offers four recording modes: Mid-Side (MS) stereo, 90° X/Y stereo, 2-channel and 4-channel surround sound all in a unit that will fit in one hand.

“A lot of people are going to be knocked-out when they use this device, but we’re really interested in seeing the response from the film and broadcast industries,” says Scott Goodman, President of Samson. “Mid-Side miking has been used in those industries since the ’80s, but it’s never been available in a handheld recorder.”

Thanks to its simple controls you can switch between the modes and widen or narrow the recording range as you go. Take the recording from the ambience of a crowded room and then bring it tight in on an interviewee or open it up from focusing on a singer to hearing the full band in 4-channel surround sound.

The menu button and other function dials are placed mainly on the sides of the H2n but everything is clearly displayed on the 1.8-inch backlit LCD screen.

The unit even has a reference speaker allowing instant playback without having to connect headphones.

The Zoom H2n is powered by just two AA batteries which keeps it going for around 20 hours of recording and should those cells die part-way through a session then the internal memory will store your work so that you can drop-in from that point when the H2n has been charged.

The Zoom H2n connects via USB so that you can import from the 32GB SD card or, alternatively, you can use it as a USB mic and record direct to your puter or use it for web and podcasting.

The Zoom H2n Handy Recorder will be arriving in September 2011 and will be available for around $199.