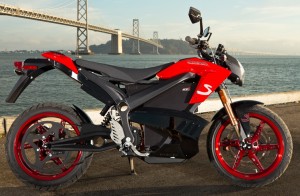 The Zero S is the latest and first street legal electric bike from Zero Motorcycles.

Previously Zero released the Zero X; a dirt bike with a smaller, 20 horsepower engine, which wasn’t allowed on the road.

The Zero S is a clutchless, one-speed bike with a battery that will let you ride for 60 miles before having to charge it.

A full recharge only takes 4 hours before you’re ready to ride again!

The body is made from aircraft-grade alluminium and the bike is fitted with a custom “Z-Force” power pack for enhanced accleration.

You get a digital speedometer as well as a special “projector beam” headlight, which apparently emits a more “focused” light.

The Zero site promises demos to soon be available in London, Loughborough, Edinburgh and Dublin.