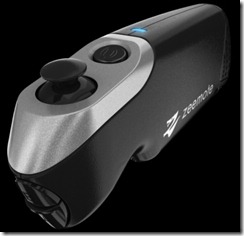 The Bluetooth game controller for mobile phoneÂ games isÂ finallyÂ available as a stand-alone product rather than part of a mobile gaming bundle.

The Zeemote shares a lot with Nintendoâ€™s WiiMote apart fromÂ it’s wireless and capable of controlling games without being attached to the end of a motion-sensing remote control.

Tiny keypads and stupidly placed joysticks make it almost too easy to either close the game or hitting the wrong button making you plummet or explode!

The makers of the Zeemote hope to put a stop to such gamingÂ errors byÂ taking the controls from the display.

The Zeemote uses Bluetooth to connect to your Nokia Symbian S60 3rd edition handsets (theseÂ are the most widely supported) or some phones by Samsing, Motorola and a few others.

It is for the N-Gage platform that Zeemote really comes into its own, though, with a growing library of supported games.