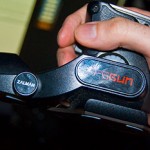 When playing first person shooters (FPS) using a mouse, no matter how engaging titles such as ‘Crysis Warhead’ are – moving your mouse around isn’t much like waving a gun around – unless you have the Novint Falcon pistol add-on.

Alec Meer from Rock, Paper, Shotgun got to grips with Zalmanâ€™s FPSGUN concept mouse gun thingy which aims to straddle the pistol and mouse gap.

On the plus side he liked the fact that the sensor is some distance away from the grip – i.e. the part of the mouse youâ€™re holding.Â  That means you can achieve larger turns with less hand movement.

The colour-changing scroll wheel felt good and chunky but then things start going a bit poor………..

As far as ergonomics – seems that there aren’t any.

The buttons, designed as handgrip-mounted triggers, are angular protrusions that dig into the fingers, the necessity for a constant claw-grip adds its own aches after a few minutes of use.

So, I’m feeling that the idea is strong but the application falls down somewhat.

Well, Zalman are better known for designing PC cooling equipment after all 😉