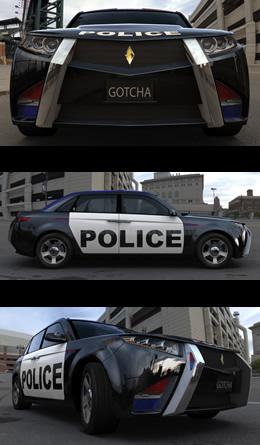 Contemplating a life of crime?Â  Well this might make you think again.

This brute is the E7 (nothing to do with East Ham!).Â  At the moment it is a dream of Carbon Motors.Â  In essence it isÂ a diesel-powered Dodge Charger with aÂ huge Â list of extras that will probably never make the production model.Â  These include must havesÂ such as armored front doors and dashboards (capable of stopping 9mm rounds) and forward-looking infrared cameras.Â

The E7 would go from 0 to 60 mph in six seconds, with a top speed of 155 mph (not bad for an armored oil burner!)Â According to Li, the E7 would start in the â€œhigh-20â€™s,â€ climbing up to as much as $70,000 with options like license-plate-reading cameras and even WMD sensors. In the long run, the E7 could prove more cost-effective that current patrol cars: Carbon Motors claims it will be 40 percent more fuel-efficient, with a lifespan of 250,000 miles (most models used as police cars are expected to last for 70,000 miles).

Have a gander at Carbon Motors Site for more!