Your games collection won’t work on next gen consoles 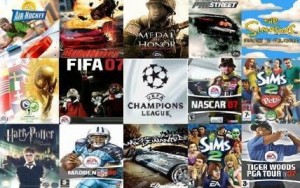 Most customer loyalty to a particular gaming console comes from the fact that your favourite classics will still run on the latest version of your PlayStation or Xbox – but this is about to change, according to someone from Electronic Arts.

Whilst chatting about the game giant’s plans for future shooty/sporty games the guy from EA said that the next generation of home consoles “will most likely not be backwards compatible.”

In a Q&A session with investors, EA’s Chief Financial Officer, Blake Jorgensen, said: “An important thing to remember is that next-gen consoles will most likely not be backwards compatible… And if you [play] multiplayer on a game, you’ll most likely not be able to play with someone on a different generation.”

Given the big changes in internal hardware providers and configuration that are appearing in leaks regarding Sony and Microsoft’s plans for its next machines, that’s not entirely surprising. That doesn’t stop it being slightly disappointing, mind.

What I found quite exciting was that Jorgensen seemed to drop hints about up-and-coming console and tablet integration. Could it be that one of the big players may offer a tablet version of its next home machine?

“You’re going to see people playing on glass at the same time they’re playing on the console. And there’s going to be some exciting innovations around that.”

One solution to the backwards compatibility issue could be through avenues such as Sony’s purchase of streaming service Gaikai – perhaps you might be able to access your classics that way instead of attempting to shove your worn out discs in to your shiny new machine.

You never know, if this means that the next gen consoles will land with out disc spinners it might even mean a cost reduction and a lower RRP!