Yike Coming to UK – Spotted in the Wild 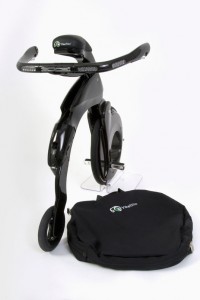 It’s always good to come face-to-face with something groovy that you’ve already reported on.

My chance came yesterday at The Gadget Show Live when I met the YikeBike – unfortunately I was by myself so there’s no pics of me wobbling about until I got used to the thing.

I first spotted the foldable electric bike back in September and am happy to report that it will land in the UK in June (in time for my birthday 😉 ).

The 10kg carbon fibre vehicle has been tweaked since September and from the original figures of a 9km range and a top speed of 20kph it can now travel at up to 25kph for 10km on a single charge before needing a plug or being slung over your shoulder using the Yike’s bag.

The New Zealand based company isn’t expecting you to ride this all the way to work (although, if you live near enough to work you could) but the idea is that you ride it from home to the train station/bus stop, fold it up get on-board and then flip out your Yike for the remainder of your commute.

The YikeBike takes 40 minutes to charge and just 20 seconds to fold away. The design is fab and watching folk on the test-track in the NEC it speeds along at quite a decent lick – it certainly feels fast enough.

You can preorder here 🙂