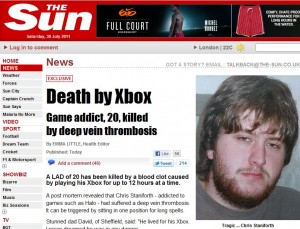 You’ve got to love The Sun. One of the UK national tabloid newspapers has decided to lead with the rather sensationalist headline of “Death by Xbox”.

Granted, this wont be doing Microsoft many favours, but on reading the article it is tragic what happened and should highlight the need to have more hobbies than being sat on your backside.

The Sun’s report directly links the DVT to Staniforth spending up to 12 hours playing Xbox games and, has his father says, being “sucked in” to online multiplayer games such as Halo.

DVT is the formation of a blood clot that develops often without symptoms and is most commonly occurring in immobilised hospital patients, regular smokers and in more recent years has been linked to those taking long-haul flights. DVT’s generally occur when someone spends a great deal of time in a one position or with little movement.

The Sun states that “in recent years it has been increasingly been seen among those who sit for long spells in front of computer screens”.

This may be true but what does computer screens have to do with gaming on an Xbox? 😉

I think that the point the Sun is trying to make, with little understanding that an Xbox is hooked up to a telly and not a monitor, is that most of the ‘hobbies’ or pass-times that people are engaging in lack any need for jumping around. Most gamers I know will perhaps break for the loo, drinks and to order/receive a take-away.

David, Staniforth’s dad, is now launching a campaign to raise awareness of DVT and video games – but added he isn’t levelling criticism at Microsoft.

“Kids all over the country are playing these video games,” he said in the Sun interview “They don’t realise it could kill them… I’m not for one minute blaming the manufacturer of Xbox. It isn’t their fault that people use them for so long. But I want to highlight the dangers that can arise… Playing on it for so long is what killed him – and I don’t want another child to die.”

A common-sense statement from Microsoft said: “We recommend gamers take breaks to exercise as well as make time for other pursuits.”

Do you game for long periods of time? To you schedule in breaks?