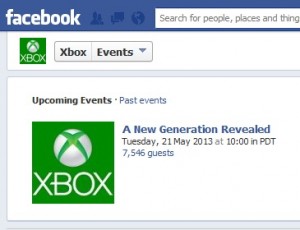 Microsoft has finally confirmed when the first public details about the next Xbox will be revealed.

Microsoft’s been busy. After announcing that the Surface Pro will be coming to the UK earlier, their Xbox team has confirmed that the May 21st event will be the date and 10am PST in the USA (6pm BST UK time), will be the time.

An event listing on Facebook talks of an Xbox Live and Xbox.com livestream. I think most gamers are more interested in backward compatibility.

“A New Generation Revealed. Be part of this historic online event, featuring a live stream, video, images, updates and more,”

The official blog has the legend:

It will also be broadcast on Spike TV in North America. In a follow up blog post, Xbox’s Larry Hryb, ‘Major Nelson’, added that after the May hardware reveal the firm will show software at E3 in June: “On Tuesday May 21st, we’ll mark the beginning of a new generation of games, TV and entertainment. On that day, we’ll be holding a special press event on the Xbox campus and we invite you to join us via the live global stream that will be available on Xbox.com, Xbox LIVE and broadcast on Spike TV if you are in the US or Canada.

“On that day, we’ll share our vision for Xbox, and give you a real taste of the future. Then, 19-days later at the Electronic Entertainment Expo (E3) in Los Angeles, we’ll continue the conversation and showcase our full lineup of blockbuster games.

“We are thrilled to pull back the curtain and reveal what we’ve been working on.”

To ensure that you don’t miss the Xbox reveal event, there’s a handy page on timeanddate.com here.