Xbox 720 to get Tablet Controller just like Nintendo Wii U 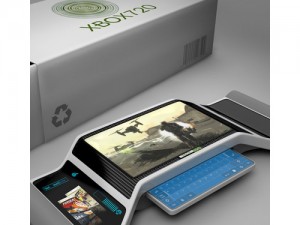 Microsoft’s next generation console, call it Loop or call it Xbox 720, could be getting a swanky new controller complete with in-built scree – like Nintendo’s Wii U.

Industy insiders say that the Xbox 720 will get controllers that are basically regular Xboz controls with a HD screen in the middle.

The HD touchscreen will be able to be used separately when the console is switched off. This is open to guesses as to what for exactly. Gaming when the television isn’t available would be the obvious one, but perhaps web browsing, accessing Sky, Netflix and social media sites might be a bit nifty too!

“That touchcreen will be second only to Kinect in how you operate your console,” go the claims. “It could be a remote control when you’re watching TV, a browser when you’re on the internet, extra buttons and information when you’re playing a game or a portable display when you want to take your game with you.”

It all sounds very cool but it sounds like this would be a premium peripheral – are you prepared to cough-up £399 for a controller?

But, saying that, if you look at it as a gaming tablet with Xbox controls then that’s not entirely bad is it?

Microsoft is planning to give us improved Kinect powers. Kinect will have greater visual sensitivity and directional sound.

Does all this sound plausible or is more salt needed? Still hoping for a June announcement.