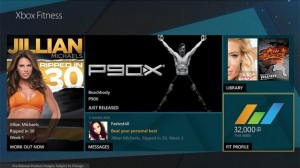 Well, that happened quicker than I expected. After the leak yesterday of Xbox Fitness, I thought that there’d be an official announcement soon… but here it is now.

Microsoft has just announced Xbox Fitness, a work-out app for the Xbox One that uses Kinect to monitor the player’s progress.

Xbox Wire says that Xbox Fitness is a selection of interactive fitness videos from fitness brands Beachboy’s P90X and INSANITY.

The videos also star some of the brands’ more well known (to those that know them) trainers such as Jillian Michaels, Tracy Anderson and Tony Horton.

Xbox Fitness looks to follow on from the original generation of fitness games. Kinect will be used to monitor the player’s heart rate and the engagement of their muscle groups in order to gauge their perfomance.

Given the improved latency of the Xbox One Kinect module, as well as its improved monitoring of the player’s engagement, Xbox Fitness should be pretty good, if you’re into that kind of thing.