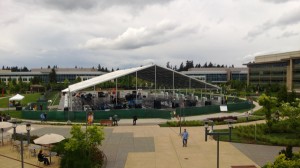 Not long to go now before Microsoft unveils the next Xbox console – Xbox 720 or Xbox Infinity or whatever it’ll be named. The company is currently building a massive marquee on its front lawn in Redmond.

The Microsoft HQ in Washington State seems to be hosting a fancy schmancy wedding but thanks to Aaron Greenberg, chief of staff for interactive entertainment, and Larry Hryb (Major Nelson), I’ve been following the updates and pictures of the goings on in Redmond via their tweets using the hashtag #XboxReveal.

Hryb’s image shows some of the interior of the tent… errr… venue, with what looks like a bank of stations ready to house the new console after its unveiling.

This is not only good news but also confirms previous rumours that, unlike Sony, it will use its first press event to show the next-generation hardware itself, not just to perform a show-and-tell of what it will be able to do when it’s finished.

The next Xbox will be launched on 21 May at 6pm BST, 10am local time with E3 happening in June.