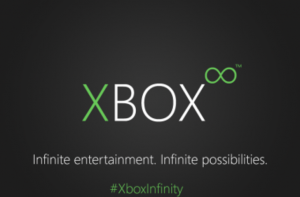 Leaked logo art has found its way online and points to the next-generation Xbox being named the Xbox Infinity.

Microsoft’s next gen console, called Xbox 720 for want of an official name, could well be names the Xbox Infinity if these ‘leaked’ images are to be believed.

Unfortunately my sleuthing has failed to find the original source for the Xbox Infinity logo and strap line, so it could well just be fan art or someone throwing eager gadgety fans of the scent. I do like the “Infinite entertainment. Infinite possibilities” legend though, I have to admit.

What does strike me as a tad more convincing is this image of a logo sent to Forbes by a “source in Seattle”.

OK, that doesn’t necessarily mean that this is the real deal, but the logo itself does sit right with the Microsoft re-branding rumours that have been floating about.

Fortunately, none of us have to wait long to know what is actually coming out of Redmond as it will be unveiled at Microsoft’s HQ on May 21st.

Most are betting that we will actually get to see the new machine at the reveal, unlike at the Sony PS4 press event, with the controllers and new Kinect 2 also revealed.

However, the vast majority of the games themselves will be saved for the dedicated press conference at E3 in the second week of June where we’ll find out which, if any, of your Xb0x 360 games will run on the new hardware.