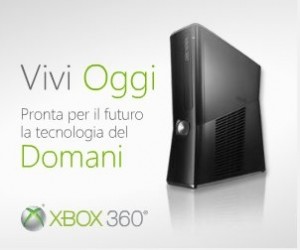 Oopsy! It seems that Italian gamers couldn’t wait to announce the Xbox 360 slim.

Adverts have appeared outing the new slim Microsoft Xbox 360 which were then spotted and then quickly removed.

Hopefully overheating and the dreaded RRoD could be a thing of the past as the new slim sides seem to have larger vents and so increasing air-flow.

The Italian ad proudly announces: “Vivi oggi pronta per il futuro la tecnologia del domani”. For those (like me) that have little or no understanding of the beautiful Italian language means “Live today ready for the future technology of tomorrow“.

There are some out there that would put the tech of tomorrow as a nod to 3D gaming as the PS3 already handles those. It could be that or it’s actually the future of Microsoft’s new Kinetc controller!

“Kinect? Is that like Natal?” I hear you ponder.

Kinect is Natal is my only response 🙂

Kinect was unveiled in an all singing, all dancing event featuring the circus troupe Cirque du Soleil at the Los Angeles gaming conference, E3.

The new gesture tech uses your body movements and means that you don’t actually need to handle a controller.

The new range of Xbox 360’s will be compatible with Kinect and new jumpy-up-and-down-wave-your-hands-in-the air gaming titles have already been mentioned such as: Kinect Sports, Halo: Reach, Fable III, and Gears of War 3.