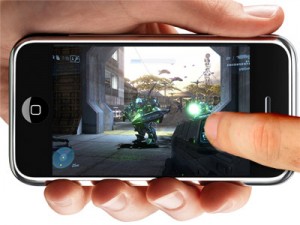 Do you get twitchy when you’re away from your Xbox 360 for more than an hour?

Do you happen to own an iPhone?

Well, you could get Xbox 360 games on your iPhone soon – and it may hit the Appley hand-held before landing on Windows Phone 7.

Odd as it may sound but then this isn’t Microsoft’s doing…..

Novell has shown off a new method for turning Xbox 360 games into iPhone apps – Android owners could well get in on the action too!

WinMo7 is due later this year and will bring XBox 360 games to your mobile but the big M’s frenemy, Novell, looks like itâ€™ll pip it to the post and bring it to iPhone and Android before Microsoft.

Microsoft has partnered up with Nokia to bring its Flash competitor Silverlight to Symbian phones but Xbox 360 games have not hit Symbian phones yet.

As if to rub Microsoft’s nose in it Novell has shown an iPhone app version of the Indiana Jones games which, incidentally, Microsoft used to demonstrate Xbox 360 games running on Windows and Windows Phone 7 handsets. Hmmmmm……..

This all means that If games originally intended for Xbox 360 and Windows Phone 7 blowers can be just as easily chucked over to Android and iPhone it kinda takes away the unique selling point of WinMo7 phones being the choice of casual gamers doesn’t it?

Halo on iPhone anyone?