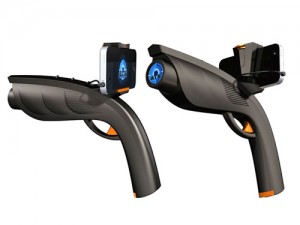 Anyone remember laser tag? Who loves first person shooters? Who loves killing zombies? Who owns a smartphone? If you’ve answered yes to any of those questions then you need to check out the Xappr guns.

Xappr wants to set you loose around the streets shooting at aliens and zombies in an augmented reality killing spree thanks to their sci-fi styled weaponry.

The Xappr Guns connect to a smartphone and thanks to a bunch of downloadable apps will place you in the middle of the battle ground of your choice.

The best thing about Xappr’s augmented reality shooters is that they’ll play nice with almost everyone. So it doesn’t matter if you’re running around with an iOS, Android or Windows Phone handset.

For fans of laser tag, or those that just love the idea of shooting at their friends, the player-to-player combat game called ATK will soon be available. Time to choose from an assortment of weapons and get your warpaint on!

You can pre-order the Xappr for $US45 each including postage and shipping.