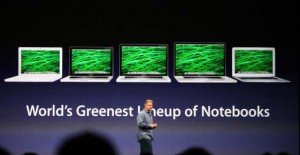 The MacBooks have been given a bit of a spec bump for their 13 inch MacBook and so brings it into MacBook Pro territory. It gets the backlit keyboard, SD card slot and the option to be loaded with up to 8GB of RAM.