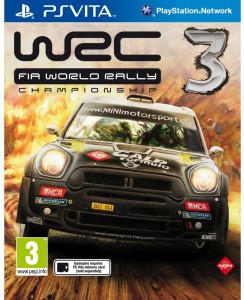 Bring the real WRC experience with you’….let’s hope so.

Milestone’s WRC 3 smashes onto the PS Vita, so could this really be the handheld’s first real thrilling driving experience?

Right from the opening it’s a promising start; a cracking intro and voiceover set the scene for what hopefully is a gravel filled, break neck speed, adrenalin rally. First thing to blow anyone away are the graphics, wow. Tell your girlfriend to hit pause on the Sky+, the Kardashians can wait, she’ll be peering over your shoulder for the next 2 hours. Having played games since year dot, to finally have a PS3 in the palm of your hands is pretty cool.

The game consists of 2 modes. WRC Experience is where you find single stage, single rally and championship. Multiplayer mode is the place for leader boards, custom match and create matches.

Best place to start is the WRC Experience which consists of a single rally as opposed to selecting an entire rally made up of stages. Here you can pick your beast, track and get dirty. The full blown Championship consists of 6 rallies; Monte-Carlo, Greece, Germany, Wales, Spain and France. Once you have flicked through the 3 classes of rally cars it’s time to hit the tarmac, gravel, snow and ice.

Right from the off everything connects; the handling, the acceleration and the engine noise – this is rallying at its best. Handbrake turns around hairpin bends, long flat out straights and bumps that send you skyward. It’s all here. The vehicles feel heavy and responsive. If you sling it around an icey bend you will feel the difference to scooting around a dusty track. Every track surface brings a different feel. Being not too much of a sim you can quickly master the controls and get right into the action. Car damage is there also, losing a bonnet or two will always brings a smile to your face. One too many clunks against the stone walls in Wales though and something’s got to go, most likely the handling which can be repaired at the end of each stage.

Once you’ve played for a short time you’re going to be eating away at other folks’ lap times but don’t think the hundreds of spectators are gonna be wetting themselves as you hurtle past at 150kph, there aren’t any. This is not Guitar Hero. You may pass one or two fans but on the whole the scenery is pretty basic – something had to be compromised as it’s on a handheld. The sky and clouds look stunning though if that helps. WRC has all the usual features you would expect; in car view, different car settings to mess with, auto repair, respawn support to get you out of the odd ditch you might find yourself in, a cracking menu soundtrack and extra DLC on its way.

Downsides? Maybe there could have been more player modes and more tracks, but for the Vita’s first real rally outing it’s a cracker.

FINAL VERDICT:
Lizard rating – Sat on a rock in the sun lapping this one up…8.5 out of 10
Punk rating – A killer rally game with an achievable platinum…8.0 out of 10