You know the drill. Unsurprisingly you’re a Worm, who’s job is to out think your other worm opponents so, you know, you don’t end up as worm food.

There are 4 classes of worms: Soldier, Scout, Scientist and Heavy. All have advantages and disadvantages.

The Heavy, for example is very slow, but can’t be pushed around too easily, whereas the Scout is very fast, but is also a complete pushover. The Scientist is the brains of the operation but not someone you would want on the front line. You’ll mostly be sticking with the Soldier who is an all-rounder.

The classes will be something new for Worm fanatics but this is still very much the Worms you know and love. In the process of your journey you have a whole host of utilities and weapons at your disposal – jet packs, grenades, mines..not forgetting some of the classic Worms weapons such as Sheep. If you’re not familiar with Worms you read that right. Sheep. You can also use water physics around you, to either drown or slow down your enemies.

On your travels, you’re also accompanied by fictional wildlife documentary maker Don Keystone (brilliantly voiced by Matt Berry) as you make your way through the single player campaign. The British humour shines bright and is genuinely funny throughout. 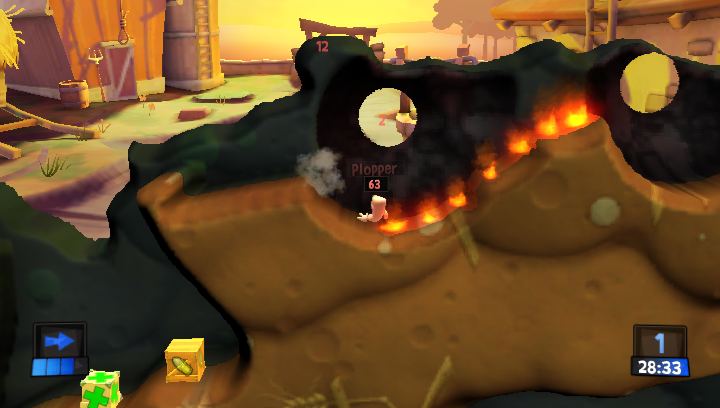 There is a staggering amount of content here to get stuck into. Levels are set across different environment themes: Sewer, Farmyard, Spooky, Beach and not forgetting the Mars, Funfair and Medieval DLC packs are included also. This comes to a mind boggling 72 levels.

Some are missions. Some are puzzles. Some are Deathmatches. All are fun.

Seriously Worms Revolution Extreme is an absolute blast. Worms as always is a strategy game where you need to use your brain way more than any quick reflexes – I mean you’re a worm, there’s only so quick you’re gonna move, but blowing stuff up from afar and hearing a worm shout “Fatality!” in a way that makes the Mortal Kombat voiceover guy sound like he’s been sucking on helium is hilarious.

The turn based strategy on show here resembles the weirdest game of chess you’ve ever played in your life. The real reward here though is out thinking the other worms. When you get the eureka moment of cracking how you can commit mass wormicide, you’ll feel like the Worminator. That’s not suggesting this is easy. Hell no. Your first training section in the sewer (essentially a tutorial) is 8 levels alone. And 5 puzzle levels are added on to that. Furthermore, If you make a mistake at any point, you’ll have to start the level again. It can be infuriating, but Worms will keep you coming back for more until you’ve beaten it. Quite often I would get 90% through a level and ridiculously mistime a jump and have to start again. And whilst I’m heading to an early worm grave, Don Keystone is in the background cracking gags! And annoyingly, he’s bloody funny too, the cheeky scamp! 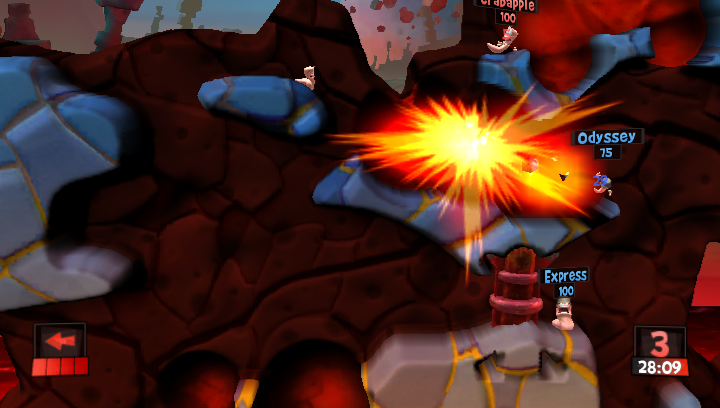 After opening the can of worms that is the (very extensive) single player campaign you can hit the multiplayer. There are 3 main modes here: Deathmatch, Classic and Forts. With this PS Vita version Team 17 have also included touchscreen controls, cross save with ps3 and Treasure mode. Treasure mode enables you to link up with your friends online and help each other unlock gifts using a lock and key system. It’s a nice touch to a game that is already incredibly good value for money. The game has a very doable trophy set too, including a Platinum :plat.

If you’ve played Worms before, you will love Worms Revolution Extreme. And if you haven’t played Worms? Well you’ll probably still love it.