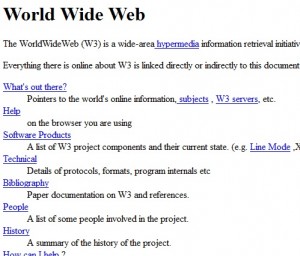 When you mention CERN these days, most people will think “large hadron collider” but the clever folks over at CERN were also responsible for devising the fundamental web standards. As part of celebrating the World Wide Web’s 20th birthday they’re bringing back the first ever website to its original URL.

Officially, the first website was launched in 1991. But, on April 30th 1993, the world wide web was developed by Prof Sir Tim Berners-Lee while working at CERN and the organisation made the WWW technology available on a royalty-free basis.

According to Dan Noyes, the web manager for Cern’s communication group, re-creation of the world’s first website will enable future generations to explore, examine and think about how the web is changing modern life.

“I want my children to be able to understand the significance of this point in time: the web is already so ubiquitous – so, well, normal – that one risks failing to see how fundamentally it has changed,” he told BBC News.

The website, naturally, looks pretty bare by today’s standards and contains only text explaining some of the basics of the World Wide Web.

Now, CERN has dug up a 1992 copy of the site, the earliest version it could find, and put it back online at its original address.