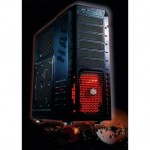 A mighty big claim that, MrÂ YoYoTech Fi7epower MLK1610 -Â You up for the task?

Challenging something like the official record for the World’s Fastest Desktop isn’t something to take lightly – you’re gonna need something a little special.

The Intel Core i7 to be precise -Â but not just any Core i7.

Backing up the new chip is an Asus P6T motherboard, which boasts Intel’s latest X58 chipset. Then added to that you’ve got a staggering 9GB of high performance DDR3 RAM (that’s 2GB per channel and an extra 1GB thrown in for good measure). Then they throw in anÂ 80GB Samsung SSD to make things run even faster whilst staying completely silent.

Gamers will be salivating and getting all unneccessary wonderingÂ what sort of gaming specs this brings to the table.

The Fi7epower MLK1610 sports the latest and greatest Radeon HD 4870 X2 graphics card with 2GB of DDR5 memory. ButÂ only the one of them. BOoooooooooooooooooooooo!Â

The Asus P6T motherboard supports AMD’s Crossfire – a means of hooking up a pair of graphics cards to work in unison – so there’s no real excuse as to why there’s only one graphics card on board.

Saying that though, YoYotechÂ do offerÂ quite a fair bit of options for customisationÂ so you can decide exactly how you want it kitted out – ie, add another Graphics Card 😉

So – isÂ it as fast asÂ it sounds?

ApparentlyÂ It has blown the former world record holder out of the water, and in practical terms it can be expected to perform twice as fast as anything powered by Intel’s former top-of-the-range CPU.

The downside, as you’d expecty is the Â£4,000 for the version described above.

So, fast and mindboggingly expensive.

But a world champ none-the-less