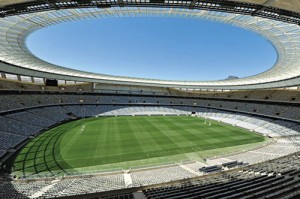 You may be aware that there’s some football thing happening soon….

….that thing happens to be something called the World Cup which kicks off in South Africa in a matter of days.

There will be 69,070 ‘enthusiastic’ footy fans shoehorned inside Cape Town Stadium and, chances are, they wont be sat there quietly.

No-sireee! There will be the usual chanting, shouting, booing, abusive language and general motivational speeches being screamed as loud as possible!

Thankfully, thanks to some gadgety know-how, the people living in the area shouldn’t hear much of that. Although the cleverness stops once the stadium empties and the melee hits the streets after each match….. but I digress…..

The new stadium is situated in Cape Town’s Green Point neighbourhood and when it was decided that’s where the stadium was going to be built the locals were rightfully unsure about the amount of noise that a bunch of World Cup watchers were going to make.

The brains behind the stadium’s design took this into consideration. The journey ended with the team from Schlaich Bergermann cleverly engineering the world’s largest glass ceiling!

The 398,265 square foot roof is made up of 9,000 half-inch-thick glass panels with a Teflon and fiberglass mesh suspended below the glass. All of that is designed to bounce the crowd noise back to the pitch and not through the central hole of the stadium.

Obviously this roof does do normal roofy things such as protecting the crowd from the elements.

At least while there’s a game on you’ll be able to hear yourself think outside of the arena…. ah…. but after the final whistle…. pass the earplugs and barricade your doors!