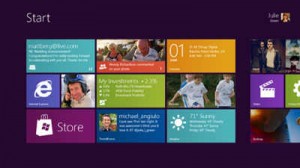 Microsoft will finally reveal its new Windows 8 operating system in full today at the Build conference in California.

We’ve all seen the phone-like screenshots and even been slightly amazed at the speedy boot-time video of a mere 8 seconds.

Microsoft is following Apple’s iOS (iOS 5 is being sent to iPhone 5 builders)and Google’s Ice Cream Sandwich (out soon with Jelly Bean named as the next Android OS) as Windows 8 is designed to play nice with tablets as well as PCs.

The Windows 8 homescreen is tile-based which is all very cool but there has been little word as to how the Windows mainstays of Word, Excel, Powerpoint, et al will function.

All shall soon be revealed as the conference starts later on today at 5pm (GMT).