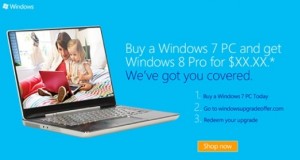 Reports are coming through that Microsoft’s Windows 8 Pro software will start keenly priced only to be inflated soon after.

After the free Windows 8 trial hit the interwebs it was easy to think that Microsoft had started showing a more benevolent side.

Well, the company’s upcoming operating system, Windows 8, will be arriving shortly and where UK prices are still to be fixed it does sound like the special release price for Windows 8 Pro wont last for long.

The software maker will also offer a Windows 8 to Windows 8 Pro upgrade option at retail stores for $69.99 until January 31st when the price reverts to $99.99.

Microsoft previously announced its $39.99 Windows 8 Pro upgrade pricing for existing Windows XP, Windows Vista, or Windows 7 users — this is an online exclusive for those wishing to download the software without a DVD option.