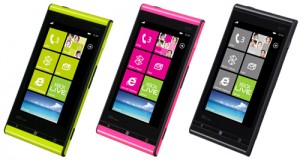 Last week I showed you some blurry cam pics of the Fujitsu Toshiba IS12T. Now here’s some press pics of the world’s first handset to feature the new Windows Phone 7 Mango OS.

All the development has been completed on the new mobile operating system and the finished software has been sent to handset manufacturers and mobile operators for their configuration and testing. Everything is still on target for an Autumn release.

Also penciled for an Autumn release is the IS12T which will land in Japan in September sporting the latest and greatest Windows Phone 7 Mango software.

As well as being equipped with the bang up-to-date OS it’ll be Japan’s first water and dust-proof smartphone. Not only that, it also has another world’s first claim as it will be rockin the world’s highest megapixel camera to be shoved in to a mobile phone with its 13.2MP snapper.