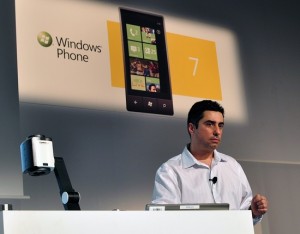 Loose lips sink ships and tactless tweeting terminates employment it seems. Joe Marini gave too much of his opinion regarding Nokia’s upcoming Windows Phone handset and Microsoft’s given him the boot.


The head of Microsoft’s IE Mobile for Windows Phone has been sacked for discussing Nokia’s next-gen Windows Phone handsets on Twitter. Joe Marini was told to empty is desk into a box after he posted some tweets which suggested that the new phone wasn’t exactly the best thing since sliced-bread.

Marini started off really excited and upbeat with: “I just got a chance to try out one of the slickest looking #Nokia phones I have ever seen. Soon, you will too! #wp7.” That’s pretty much what I’d expect from a Windows Phone employee but then….

….he started answering questions about the Nokia device.

“Overall I would say a solid 8 [out of 10]. Solid feel, good camera and responsive UI and nice little touches on the body construction,” Ok, not full marks but still not that bad – but then he wrote his resignation with “Yeah, the camera was good, but I didn’t have optimal lighting. I’d like a larger screen too.”

Again, not wholly damning but given that Microsoft has been taking a harder line on leaks in general then discussing things publicly on Twitter isn’t the smartest move no matter how innocent you thought it was.

I still think that the 7.5 update is going to be a good one 🙂