Windows Phone grows in Popularity by 277 per cent 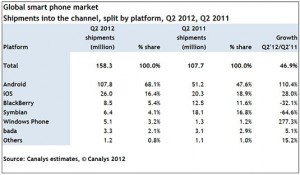 Windows Phones are definitely growing in popularity – this is before Windows Phone 8 drops later this year. But just how much of the market has the Microsoft mobile operating system taken?

We’ve already seen glimpses of Windows Phone 8 and even handsets from HTC and Nokia with word that even BlackBerrys may become WinPho-powered.

This means that Microsoft has bragging rights to an annual growth of 277.3%, more than twice as much as Android, the market leader.

As impressive as that is, the gap in the market share is so huge that Microsoft’s smartphone operating system still accounts for only 3.2% of all smartphone devices.

That puts Windows Phone in to fifth place in the global smartphone race behind Android, iOS, BlackBerry and even Symbian.

I would expect WinPho to carry on up the charts as BlackBerry looks to be delaying the release of BlackBerry 10 and Symbian continues to struggle even when bolstered with the most powerful cameraphone out there.

It will be interesting to see how the arrival of Windows Phone 8 in October affects Microsoft’s positioning with iOS and Android.

Are you Andorid or iOS for life – or are you being tempted by Windows Phone?