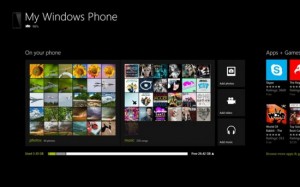 There’s only a few hours to go before Microsoft takes to the stage and announces and launch the final part of its Windows 8 upgrade – the Windows Phone 8 mobile operating system for smartphones.

Microsoft relased its Windows 8 operating system for PCs and tablets on Thursday and today, on the side of the weekend, they are all set to unleash Windows Phone 8 for… well… phones.

Ahead of this event the Redmond software giant has released a new companion app in the Windows Store that’ll work in tandem with the new devices to allow your computer and your Windows Phone 8 work together seamlessly.

The idea is that with the Windows Phone app so you always have your photos, videos, and music, and more where you want them:

The key features of the app are:

The app is listed as a “tool” in the Windows Store and has been given a 12+ age rating.

You can access onto the new Windows Store to view or download the App now however you won’t be able to do very much with the App until the official Windows Phone 8 OS and the handsets that run it are released.