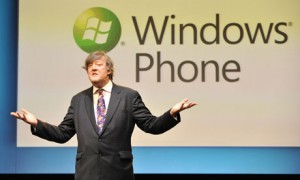 If you’ve been online over the previous 24 hours or so you can’t help but have noticed that Windows Phone 7 has been released.

Top tech luvvie, Mr Stephen Fry, was even called in for the event!

The Apple fanboy seemed to be switching sides when he gushed â€œI have felt enormous pleasure using this phone,â€ and â€œMicrosoft [are] doing something they can be proud of”.

Let’s face it – I would find it hard not to enthuse over getting my hands on nice, new, shiny tech before anyone else. Especially if it did what it promised!

So, what’s so good about Windows Phone 7?

It looks simple and uncluttered to use. I think those moving from regular handsets to multitouch devices are going to be less daunted by the new Microsoft OS thanks to its simple home screens made up of equally simple 2D coloured tiles.

You know that you’ll be getting a decently powered handset – Microsoft has very strict guidelines for any mobile looking to run Windows Phone 7. For instance, the would-be WinPhone 7 device has to sport at least a 1GHz CPU. Although this means that finding a ‘budget’ WinPhone 7 phone will be tricky it also means that apps and games can be a little more cleverererer.Â  You see, with other systems developers have to keep in mind that some devices may be less powerful than others often meaning the top-of-the-range versions aren’t reaally pushed to their limits.Â  Not so if you demand a decent baseline level.

Skydrive sounds a great idea and an extra 25GB of storage is always welcome – Looking to keep the vids and pics you’ve taken with your WinPhone 7 blower? Then cloud storage must be the way forward. Also, it cuts out the chance of your memory card getting in to the wrong hands 😉

Microsoft makes ‘Office’ and the Xbox – It might seem obvious but this means that your WinPhone 7 handset will get along just fine with them. You can view and edit Microsoft Office files (Microsoft Word .doc files and Microsoft Excel .xls spreadsheets for example) without any fiddling around and need for conversion.

You can finally get a Zune – Those of you in the UK that have been waiting for the iPod alternative can now get it as the integrated media player on Windows Phone 7 phones. The Zune multitmedia interface has another neat trick up its sleeve as well as looking pretty. It lets you sync your Windows Phone 7 deviceâ€™s multimedia content with a computer over a home Wi-Fi network. As far as I’m aware this is the only smartphone platform that has true wireless synch’ing.

Have you got any more opinions about Windows Phone 7? Why not share those thoughts below? 🙂

Photo from The Guardian.