Windows 8 out and About with Added Mosh \m/\m/ 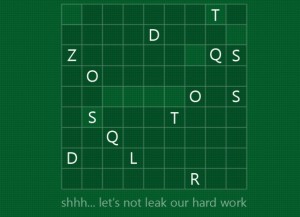 Well, to some. Microsoft is busy flashing Windows 8 to its bestest buddies in the cool gang.

Software version 7971.0.110324-1900 of the operating system is going to original equipment manufacturers (OEMs) and it appears that the new OS includes a History Vault feature that sounds awfully like Apple’s Time Machine.

Joyfully, some sneaky screenshots are starting to strike an online pose – like the one here that’s coyly asking testers not to leak the look of Windows 8. Errrm…. of course we’ll keep it to ourselves right?

The software is distributed via Microsoft Connect, the system that collects your feedback when things go wrong – that sarcastic button that pops up when Word or similar folds up and dies in the middle of some unsaved thing that you’re already late to prepare for a presentation and asks you if you want to submit a report… yeah, that system.

The Windows 8 History Vault is not a new series where Tony Robinson has to merge gymnastics with uncovering artefeacts of significant historical importance – it is in face a system for automatically backing up your files and data, and restoring your computer back to how it was at a particular moment. Hmmm….. could save the gnashing of teeth caused by the scenario mentioned in the previous paragraph 😉

Expect Windows 8 to be of a similar, clean, clear, design as Windows Phone 7 as the latest iteration of the Windows puter OS will no doubt be slapped onto a range or Windows tablets and we all know how much in vogue tablets are at the moment. I’m kinda digging that this tile based UI is being codenamed Mosh – ah, Sonisphere this year and the Big 4 – could that be a coincidence and are there some ol’ thrash fans working got Billy G?

A public beta of Windows 8 could be around in September this year – a predicable clash with Apple’s iOS X Lion update anyone?