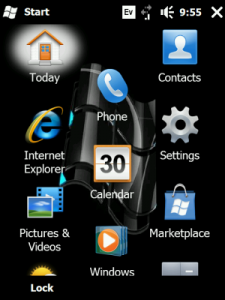 It sounds like Microsoft is in the final stages of sorting out their Windows Mobile 6.5 OS update for public release.

This will be Microsoftâ€™s answer to the very successful Apple iPhone App Store and is expected to make its global debut with WM6.5, but details up to now have been a tad sketchy to say the least.

Well, that changed today when Microsoft gave a lucky few Windows Mobile enthusiasts a sneaky-peek at the Windows Marketplace. 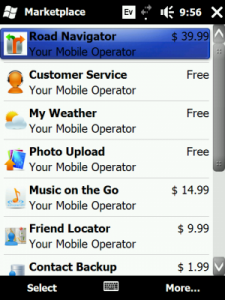 ppcgeeks forum member MrHawaii managed to get into the Windows Marketplace and take a quick shufty before Microsoft pulled the plug.

Using a “cooked” version of a Windows Mobile 6.5 ROM, MrHawaiiÂ opened up the Windows Marketplace app today to find that the â€œComing Soonâ€Â banner had been replaced by a largely-functional mobile application store.

After having a wander round and playing with theÂ UI, MrHawaii found that the Pandora application was ready for download.

â€œToday I clicked on it and it said CAB needed to be installed. After install, voila! Marketplace open for business. I already downloaded Pandora successfully. There are not too many fun apps yet and most of them come with a charge. But the layout of the store was very finger friendly and very snappy.â€

Did you notice that?

Did anyone else expect to see words like â€œfinger friendlyâ€ and â€œsnappyâ€ being used to describeÂ Windows Marketplace?

So, MicrosoftÂ WM6.5 and Windows Marketplace might be a pleasurable experience after all – but will it topple iPhone’s App Store off the top spot?