Windows 8 gets Officially Named by Microsoft – Three Versions to Arrive 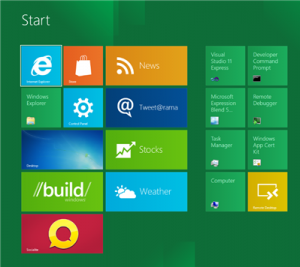 Microsoft has finally officially named the next Windows operating system as well sharing the different versions with everyone.

Microsoft has proudly stated that Windows 8 will be called… Windows 8.

Following the trail blazed by Windows 7, Microsoft has decided that it no longer needs anything fancy like Windows ME, Windows XP or even Vista. Just, Windows 8.

Now that’s out of the way I can reveal that there will be three versions, two for Intel-based machines and one for the first Windows on ARM devices.

Intel-based x86/x64 computers will get a choice of Windows 8 and Windows 8 Pro. For those machines based on the ARM chip architecture, the operating system will be called Windows 8 RT (Runtime).

The Intel-based Windows 8 will be the SKU (Stock Keeping Unit) which will be shipped with consumer machines while Pro will bring added features like encryption, virtualization (using the US spelling), PC management, and domain connectivity.

Windows Media Center will be available as an add on to Pro.

Microsoft says the the features on Windows 8 Pro are designed “to help tech enthusiasts and business/technical professionals obtain a broader set of Windows 8 technologies.”

The Windows 8 RT edition will be for Windows on ARM (WOA) machines only, and will be primarily aimed at tablets.

Because of this tablet-centricity, Windows 8 RT will come with touch-enabled versions of Microsoft Word, Excel and Powerpoint.

The announcement of three versions of Windows 8 offers a simplified approach compared to Windows 7, even with the differing chipsets to consider.