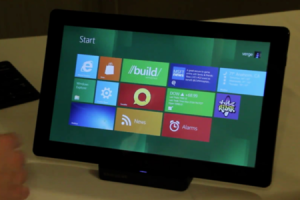 The confusing and often mocked Windows ‘Start’ button which is perversely used to stop, or rather close down, your PC may become a thing of the past with Windows 8.

The now iconic Windows ‘Start’ button has lived in the bottom left-hand corner of your PC screen for around 17 years – since Windows 95.

This is what you click to access your programmes, your drives and yes, to shut your machine down.

It has now been noted that the “Consumer Preview” of Windows 8 doesn’t have that Start icon.

There have been leaked images before that has shown that the Start button has been flattened to blend in with the new Metro styling. Now the most recent shots show a distinct lack of that go to spot.

A contact close to the Microsoft development team suggests it wouldn’t really be the end of the Start button: instead, the operating system would feature a hot corner to do the job.

This would make it easier to put Windows 8 across desktops, laptops, tablets and mobile phones (Windows Phone 8) though I guess.

Hmmm… could the big M be taking the Apple route for their new operating system?