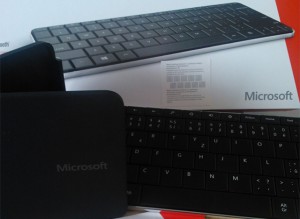 Microsoft’s Windows 8 operating system has already found a buddy in the Surface Tablet but it now seems to be getting its own portable ‘Wedge’ keyboard.

Eager to make the most of its latest OS, Microsoft is really getting in to the hardware side of things. First it was the Surface tablet which comes with a choice of keyboard covers but now, according to WinMag, Microsoft will soon release its Wedge Mobile keyboard.

The picture shows the Wedge keyboard, what appears to be a cover and its packaging, complete with the redesigned Windows logo.

The Wedge keyboard will be “introduced very soon” according to the site, and will be sold together with Windows 8.

Microsoft previously revealed that its hardware partners will start to use the new Windows logo on PCs and phones later this year, with the company’s Surface device adopting it too.