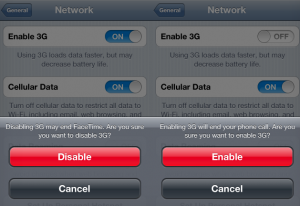 Soon, when you get the urge to FaceTime someone you’ll be given the option to video call via Wi-Fi or 3G on your iOS device.

The new choices coming to an Apple device near you were slipped out in the current version of software are anything to go by.

Every iPhone, iPad and iPod Touch owner will be used to Apple’s iOS Skype-alike vid calling app. It’s been a part of the mobile iDevices since its introduction in 2010 along with iOS 4 and the iPhone 4. The other fact is that it will only work when a device is connected to Wi-Fi.

Several people have started to notice prompts within iOS 5.1.1 which gives a humongous hint that Apple is making FaceTime over 3G a distinct possibility.

The strongest example involves a user connected to a FaceTime call and attempting to disable 3G connectivity from within the Settings menu. A message appears: “Disabling 3G may end FaceTime. Are you sure you want to disable 3G”.

Now, disabling 3G will have no affect on the FaceTime call right now as the device *has to be* connected to Wi-Fi in order for it to work.

The thing is, why is our Apple devices telling us that disabling 3G can end a FaceTime call then?

Apple’s late CEO Steve Jobs introduced FaceTime in 2010, explaining that it would only work via Wi-Fi and that “we (Apple) need to work a little bit with the cellular providers to get ready for the future”.

Android has been allowing 3G video calls for quite some time and, as the most prevalent competitor to iOS, it stands to reason that Apple may want to level the playing field.

Before I hear the shouts from the Jailbroken iPhone brigade – I know that Facebreak and such will allow vid calling over 3G. I’m talking about non-JB device 😉

Apple is set to reveal iOS 6 next month at its WWDC event in San Francisco so let’s see what that brings, as well as a Steve Jobs designed iPhone 5 from iPhone5.com 🙂