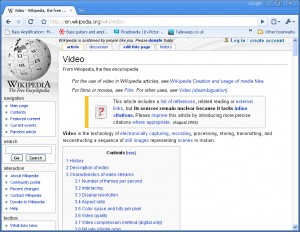 Most of you will have used Wikipedia at some point – and generally the information is correct.

As a resource it is actually quite handy as it contains easy-to-get-at text and pics, but itâ€™s lacking when it comes to videos.

This is all going to change in a couple of months, as Wikipedia has plans for video – This means having more videos on the site, and letting contributors edit and annotate the actual videos.

According to MITâ€™s Technology Review, this should happen in a coupla months.

Wikipedia editors will get a new option, ‘Add Media’, which will let them search for videos, and insert portions of the video (via a simple drag and drop interface) into the article. Further plans include annotating the actual videos, and editing as well as reorganising Wikipediaâ€™s video collection â€“ just like what happens to Wikipediaâ€™s articles already.

So, where are all these vids coming from then?

First, thereâ€™s the Metavid, a repository of Congressional speeches and hearings; Internet Archive and its 200,000 videos, and Wikimedia Commons, which is currently mostly holding photos but has a collection of video files as well.

Once this is up and running Wikipedia is hoping that users and editors will be more keen on uploading videos to Wikimedia.

There is a just a little, tinsy-winsy stumbling block though – all the videos added to Wikipediaâ€™s database will have to be based on open-source formats.

That shouldn’t be a huge problem as Wikipedia gets so much traffic it would probably be worth a little bit of fiddling to use or convert videos to those formats – besides, more open source is always a good thing in my book 🙂