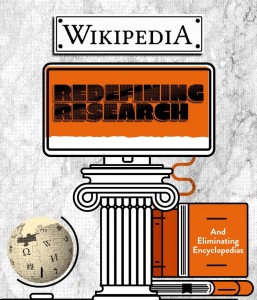 You may have heard that the Encyclopedia Britannica has officially announced that it would scrap its print edition due to plummeting sales. You may think it was about time that they handed over to the digital format but there is a smoking gun – and holding that is Wikipedia.

True, owning the $1,395 32-volume hardcover library of the Britannica may seem quaint in this age of instant info but, to me, it still has its place.

Wikipedia, the crowd-powered reference site, is arguably the greatest knowledge experiment recent civilization has ever seen.

True, it can be wildly unreliabile and be controlled by polition’s PR people, but its supporters are only to quick to point out that a self-correcting collective is more reliable and scalable than a room full of scholars (who, on occasion, also make mistakes).

Studies have even shown that Wikipedia is almost as accurate as the Encyclopedia Britannica. This infographic highlights how Wikipedia has revolutionized research and how it has become a reliable fountain of knowledge.

Check out the cool infographic below 🙂