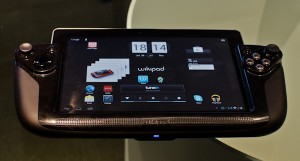 Tablet gaming may be getting a boost thanks Gaikai announcing its official partnership with the Android-powered Wikipad.

Gaikai’s cloud-based gaming smarts will be squirted to the Wikipad tablet.

The Wikipad, produced by the company of the same name, will be equipped with a 1.4GHz Tegra 3 quad-core processor, 1GB of RAM, and at least 16GB of internal storage, though the company says it may choose to increase that figure before launch.

It will run on the Jelly Bean flavour of Android OS and come bundled with the gamepad-dock. The gamepad dock gives full gaming controls whilst still allowing access to speakers and all of the tablet’s ports.

The actual tablet will only weigh 560 grams and be just 8.6mm thick, making it one of the thinnest and lightest 10-inch tablets out there; with the iPad 2 tipping the scales 40 grams more.

The curious thing is Wikipad’s partnership with Gaikai as the cloud gaming company was purchased by Sony earlier this month.

Does this risk a distinct conflict of interest between the Wikipad and Sony’s PS Vita and therefore affect any decisions to the tablet getting access to cloud-connected gaming?

If all things go well, Wikipad expects to release the tablet by the end of this year, but specific pricing and availability have yet to be announced.