Wi-Fi Will Kill Bluetooth By Next Year 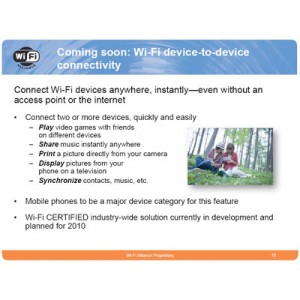 Wi-Fi could be kicking Bluetooth in to touch within the next year or so.

So saysÂ this slide swiped by IntoMobileÂ that was produced byÂ Wi-Fi Alliance.

Wi-Fi Alliance, the trade association that promotes wireless networking,Â is working on device-to-device connectivity over Wi-Fi which will obviously work at higher speeds than Bluetooth canÂ offer and it should be readyÂ by 2010!

But surly,Â Wi-Fi requires an active network in the area to work?

Ah, you see:Â With device-to-device Wi-Fi devices would be able to transfer data at Wi-Fi speeds without having to be in range of a Wi-Fi router.Â  Clever, huh?

There’s no real surprise to the fact thatÂ Wi-Fi Alliance is forcasting that mobile phones will be responsible for a large chunk of the Wi-Fi device-to-device market.Â  The AllianceÂ estimates that shipments of Wi-Fi enabled mobiles will hit 300 million by 2011.

So, not a slow start if their predictions are accurate.

Is this bye-bye Bluetooth?