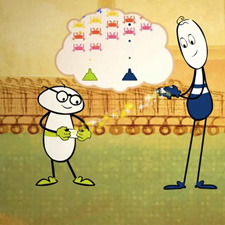 Wi-Fi Direct allows any device rightly kitted out to connect directly to another device to send and receive data. Before you write in to tell me that your Nintendo DS has been doing this for ages – that technology is proprietary. The new protocol allows compatible devices to connect in a peer-to-peer stylee: one-to-one or in a group. Most of us are walking around with a pile of data on us just on our smartphones; WiFi Direct will enable users to connect these devices with each other to share that data without the need for a local WiFi network.

The Wi-Fi Alliance will be certifying the Wi-Fi Direct standard to the relevant devices which will ensure you that they wont need wireless networks as they essentially become self-contained micro-hotspots. It will also guarantee that they’ll play nice with each other.

This should mean that an Eye-Fi memory card will be able to send a picture directly to a wireless printer. The best thing is that Wi-Fi Direct is largely software based so this could mean that a large chunk of recently released tech should be upgradeable.

Speeds for Wi-Fi Direct are based on 802.11b/g/n channels, so intra-device throughput should hit rates upward of 300Mbps. Range is the big thing here and could spell the end for Bluetooth. Those in the know say that there’s no reason not to expect future Wi-Fi Direct devices achieving similar range to our domestic wireless networks!

The Wi-Fi Direct seal of approval has already been stamped on WiFi cards from Atheros, Broadcom, Intel, Ralink, Realtek, and Cisco, as well as the Cisco Aironet 1240 Series access points.

Those devices also get to be the test-beds to certify that future devices are compatible with the protocol.

“We designed Wi-Fi Direct to unleash a wide variety of applications which require device connections, but do not need the internet or even a traditional network,” said Edgar Figueroa, CEO of the Wi-Fi Alliance, in a statement. The certification program will ensure compatibility with the standard across a range of devices. WiFi Direct devices can also connect to older “Wi-Fi CERTIFIED” devices for backward compatibility, so chances are your current equipment will work with newer devices using the protocol.

Watch the vid and let me know what you think 🙂