Why iPhone 5 or iPhone 4S? Is Apple Releasing Both? 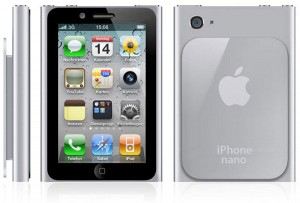 Why not? You’ve got RIM and Nokia on the ropes and your market share keeps rising – it has to be tempting for Apple to wade into the mid-range smartphone arena hasn’t it?

Well, this is the line of thought brought to light by a Wall Street industry analyst type.

The thinking is that Apple will launch two new iPhone handsets, possibly at the hoped September slot. One will be the “radically different” iPhone 5 which will be joined by a cheaper pay-as-you-go iPhone 4S.

I know that this all pangs of the iPhone Nano rumours that we’ve heard times aplenty but it does seem to make more sense this time around.

Chris Whitmore, an analyst with Deutsche Bank, reasons that Apple was to release two new iPhone devices in September: “With Nokia and RIM struggling the time is right for Apple to aggressively penetrate the mid-range smartphone market (i.e. $300-500 category) to dramatically expand its [total addressable market] and market share.”

Whitmore reckons that the iPhone 5 would be joined by a mid-range, cheaper device that, like its iPod siblings, will feature reduced functionality but still retain all the Appleness that fanboys and girls have grown to love. This sounds like the ideal time for Apple to do such a thing. People are still dealing with the crunch and the rising cost of living combined with the predicament that the BlackBerry cobbler and once friend of Symbian have found themselves in.

If Apple was do bring a new premium handset onto the market and team that up with a more wallet friendly mid-ranger that would not only be bring the hurt even more to Nokia, who will be releasing their Windows Phone handsets in October at a bash in London,Â but would also be treading on the toes of Googleâ€™s Android operating system. Android has found itself spread all over from entry-level handsets to top-level smartphones.

With a lower priced iPhone handset targeting midrange PAYG customers, Apple could also see sales of applications from the iTunes App Store ramp up as new users pimp there handsets in order to maximise the 4S/Nano’s functionality.