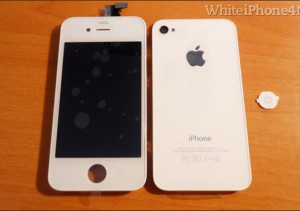 If you are disappointed that the iPhone 4 is still yet to be available in its virginal white livery perhaps a visit to Fei Lam’s website WhiteiPhone4Now.com is in order.

Thing is, the New York entrepreneur may have landed himself some unwanted attention.

The 17 gap-in-the-market-spotter set up the site which sells a DIY kit that allows you to take your iPhone 4 apart and replace the black covers with white ones.

Business appears to be good and word has it that his account has welcomed a six-figure sum. He has sold 470 of the conversion kits, with people spending around $300 (about Â£189) and then voiding their warrenty as you have to dismantle your iPhone and replace the back bits for white ones.

How the venture works is that Lam buys up spare, white iPhone 4 parts provided by a connection with Apple’s supplier Foxconn, and then ships them off to customers.

“They are some kind of anti-counterfeit/trademark firm, which sounds ridiculous, similar to what Apple is bringing up to remove White iPhone 4 Listings on eBay. I don’t know how this legal stuff works.”

Looking over the interwebs it seems that this story is getting quite a bit of coverage so he might even see more people heading to his site.

Lam doesn’t intend to take down the site, and is looking to contact a lawyer.

Would you buy the kit?

Are you on the side of Apple or Lam? If he is sourcing the cases and buying them in good faith surely it’s his supplier that needs a letter?