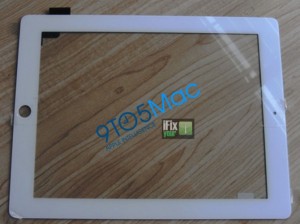 If, like me, you’re just bored with the ‘will they/wont they have a white iPhone 4?’ then you might find this marginally more interesting.

As you’re probably aware, the second-generation iPad will be announced in a couple days and, to great surprise, leaked pictures of a white iPad 2 have emerged suggesting the imminent arrival of paler iPad.

The picture, courtesy of 9 to 5 Mac, clearly shows the alleged outer frame of the upcoming iPad 2 complete with a splash of white – something that Apple has had plenty many issues with perfecting on the iPhone 4.

The predicted FaceTime video calling tech is catered for with the inclusion of the space for a front-facing camera.

The iPad 2 is all set to be unveiled on Wednesday March 2nd. Everyone is expecting it to be thinner, and have a higher-res camera on the rear as well as the new front facer.

Could Apple be dropping a pair of white gadgets? Could the white iPhone 4 arrive with the white iPad 2 or will Apple hold off til iPhone 5?

What’s your thoughts on the matter? Do you even care?

Who else is holding out for a carbon fibre version?