White Apple iPhone 4 On Sale Now! Just Need to Get to China 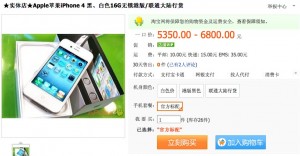 If you don’t fancy building your own white iPhone 4 out of spare parts then howsabout buying the real deal off the Grey Market?

Giz-China have published the first photos of the white iPhone 4 in full retail packaging can be seen.

According to Giz-China sources, the white iPhone 4 is currently being sold in the grey market, ranging in price of 5500 Yuan to 8000 Yuan.

You may well sit there with your jaw hitting your keyboard but this aint the first time that illegal reselling of Apple products has hit the news. Back in 2008 a report in the New York Times suggested that nearly 1.4 million iPhones were purchased by illegal means! I’m not going to mention the iPhone 4 and a certain large gadget news site either 😉

Let’s face it though – if these white iPhone 4s weren’t stolen from the factory that means somewhere along the way cash has been exchanged with some probably ending back at Apple HQ.

If you want to be flash and one-step ahead of the the crowd then perhaps a trip to China over Christmas is in order?