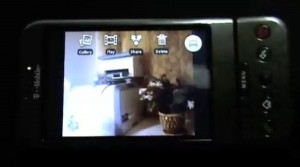 So, what’s new in the Android 1.5 Cupcake update?

It takes about a minute to update and most G1 phones will sort that out automatically.

The filming feature is called ‘camcorder’ – it has a little film logo in the bottom right corner, when touched, will start the recording.

The previously-shot footage will be displayed in a little window in the top right corner.

Videos can now be played in MPEG-4 and 3GP format, and uploaded quickly with the new ‘share’ button. That button will let you send your videos via Gmail, SMS (but not ideal), and YouTube.

You can also add a title, description and tags to the YouTube file before uploading.

Google seems to be encouraging the use of the Picasa photo sharing website as all photos are now able to be uploaded to Picasa with a caption, and can be added to specific albums if needed.

Messaging has been given tweakage and now has a cleaner feel as well as the addition of an on-screen keyboard – so now G1 users have the option whether or not to yank it out – the QWERTY keyboard that is.

Gmail’s ‘archive’, ‘labels’ and ‘delete’ tabs are permanent floating fixtures on the email screen now, instead of staying down the bottom.

The HTC Magic mobiles, which went on sale last Friday, have all these features out of the box.

Check out the video walk through below 🙂