What Happens When Aeon and Nano Collide? 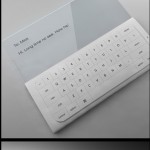 There’s something quite militant about Apple users.

There can be something amazing but if it hasn’t be touched by Apple it just wont be good enough and will look odd with all the other iGadgets.

The designer, Mac Funamizu (no, really!), loves the look of the Nokia Aeon but gave it a bit of a tweak.

It would utilise a tactile feedback technology and the surface adapts to different purposes while the e-ink screen envelops the phone in graphics and information.

If this is what a Nokia and Apple partnership could birth I say get it on!!

Designer: Mac Funamizu via Yanko where you get more pics