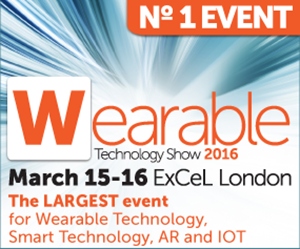 That impressive list of thought-leaders will join a stellar line up of high profile technology pioneers, visionaries and innovators at the event’s third outing, which features more than 120 exhibitors – of which many are launching products in Europe for the very first time, and a 9-track conference programme with over 200 speakers.

In addition to a number of keynote speeches including Disney Research on the Smart Home Track and a Healthcare session from GlaxoSmithKline, the event will also feature exclusive speakers such as Simon Jones, Head of Innovation at Team Sky and former UK Coach of the Year, who will take part in a Sports Performance track session.

This year’s Wearable Tech Show sees Dr Jerry Luo from the University of Southampton who will preview the ‘Smart’ Insole, a thin and flexible insole prototype that can harvest energy from walking, with every footstep powering a sensor to transmit 32 bytes of data wirelessly.

New for 2016 is IOT Connect, which is co-located alongside the Wearable Technology and Augmented Reality shows.

The Internet of Things Keynote speakers include Steve Dunbar, IoT Commercial Director at Microsoft, Francois Girodolle of connected home giant Nest, and Rob Van Kranenburg, Founder and Board Member of the IOT Council.

Other notable Keynote speakers confirmed at The Wearable Technology Show:

The Wearable Technology Show is the largest event of its kind in the world. Back for a third year running, this year’s event is bigger than ever with over 100 speakers from world-leading businesses, all discussing the past, present and future of Wearable Tech. With thought-leaders attending from industries including AR/VR, textiles, smart home, healthcare, performance sports, and mobile payment, retail and location, the show guarantees something for everyone,”

Registration for the Wearable Technology Show is open now at WearableTechnologyShow/register. I’ll see you there!