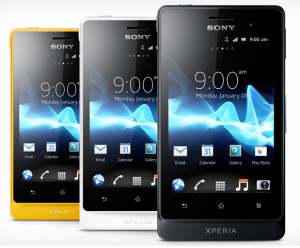 Sony has just announced the Xperia Go, a 3.5-inch water-resistant Android 2.3 smartphone, which will be known as the Xperia Advance over in the United States.

It has earned IP67 certification for its dust and water resistance.

If you’ve ever dropped your phone in the loo  (Karen) or it’s slipped in to your pint (Rob), you’ll want to hug Sony for releasing the Xperia go.

With promise of one of the best Summers in decades, this is the phone to have if you’re a bit of a butter-fingers and intend spending any time on a beach, by a pool or even a beer garden.

The wet finger tracking will definitely prove to be a useful feature if you are actually going to test the go’s advertised water resistance.

The durable Xperia comes with a 5MP fast capture camera which promises to goes from sleep to snap in just over a second.

Although it lands with Google Android 2.3, aka Gingerbread, it will be upgradable to Ice Cream Sandwich or Android 4.0 if you want to keep it formal.

Xperia go follows the other Xperias in the media sharing friendliness across TV, smartphone, laptop or tablet.

Xperia go will be available in the UK from the third quarter of 2012 and, unusually for a Sony launch in Europe, the Xperia go is already acknowledged as being a device destined for the US market as well, where it will be sold under the name Xperia Advance.