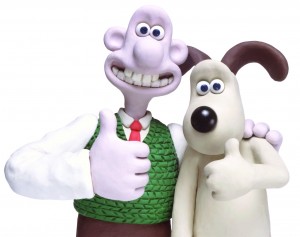 The Wallace & Gromit digital comic is taking the iPhone app charts by storm and is currently ranked number one in the UK free books app store, a first for a British comic!

The comic has also risen to the number three spot overall in the free apps chart, a cracking feat and no mistake!

Even the four paid for Wallace & Gromit comic apps are currently within the top 20 paid apps in the UK book chart.

With over 170,000 downloads of the Wallace & Gromit free app around the world, itâ€™s not only us Brits who canâ€™t get enough of Aardmanâ€™s iconic duo â€“ itâ€™s currently the number one free book download in Australia, New Zealand and Finland!

You can download the first Wallace & Gromit Comic, â€˜The W Filesâ€™ for free at www.wallaceandgromitcomics.com, and there are four other fantastic Wallace & Gromit comics available at the app store, for just 59p each!

Wallace & Gromit digital comics editor Ned Hartley said: “We’ve been amazed at how well our first app has done – Wallace & Gromit is such a great brand, and iPhone users obviously love them as much as we do!”